Pulmonary vascular remodeling plays a critical role in many cardio-pulmonary disorders such as pulmonary hypertension (PH) and chronic obstructive pulmonary disease (COPD) (often accompanied by PH). The process of remodeling and the associated pathobiology can be quite manifold and even different in the respective diseases. The origin of the narrowing of the respective vessels is still a controversial topic. The present interactive discussion describes briefly the current understanding of the vascular remodeling process in COPD-PH and shows that the origin of remodeling in COPD is not limited to the intima, as often described in the literature. The involvement of the media does not seem to be a rare event in COPD, at least in end-stage. This controversial discussion should animate experts in the field to comment this topic, either by agreeing or disagreeing with our conclusions/hypotheses. The readers are invited to present arguments either pro or contra regarding intima and/or media involvement in vascular remodeling occurring in COPD.

COPD is a collective term for chronic bronchitis and pulmonary emphysema and characterized by progressive, poorly reversible airflow limitation associated with an abnormal chronic inflammatory response in the lung. Exposure to biomass smoke, especially during cooking, is most relevant trigger for the development of COPD in developing countries, whereas in industrialized countries, tobacco smoke (80- 90%) and air pollution are the most relevant causes.1 COPD is not only limited to the lung, but also viewed as a systemic disease which includes skeletal muscle wasting, diaphragmatic dysfunction, and systemic inflammation.2 There is increasing evidence suggesting involvement of pulmonary vascular pathology for COPD development. Cigarette smoke may directly affect the pulmonary vasculature leading to vascular remodeling, pulmonary hypertension and finally to cor pulmonale.3-5 PH developing in COPD condition is classified in the group 3, according to the current clinical classification of PH from Dana Point in 2008.6

The mean pulmonary artery pressure (mPAP) in PH related to COPD usually ranges between 25 and 35 mmHg with nearly normal cardiac output.7 However, in patients with advanced COPD, mPAPs higher than 40 mmHg are quite common, especially after at least one previous incident of acute respiratory failure.7, 8 Furthermore, the presence of PH increases mortality. Importantly, PH is relevant for prognosis in COPD.9,10 The role of PH for the pathobiology of COPD is still not fully resolved. PH can be common complication in advanced COPD11 and can be a consequence of the hypoxia occurring after severe destruction of gas exchange surface. However, several publications during the last decade showed that pulmonary vascular alterations can even precede alveolar destruction12-15 indicating that cor pulmonale and late-stage PH are not necessarily secondary to hypoxia in patients with COPD.

One characteristic feature of pulmonary vascular remodeling is the thickening of the arterial wall by which the vascular lumen and the internal diameter are reduced, ultimately leading to increased pulmonary vascular resistance. In hypoxia-induced PH, the thickening of the vessel is a complex process that finally culminates in uncontrolled proliferation of pulmonary artery smooth muscle cells (PASMCs) causing the hypertrophy of the media layer16. In particular, hypoxia is often seen as a driving force leading to these vascular media alterations, in which hypoxia inducible factor (HIF)-1α seems to be a major driver. This transcription factor controls a variety of hypoxia-dependent genes which are involved in the pulmonary vascular remodeling process, such as erythropoietin, glucose transporters, vascular endothelial growth factor (VEGF), endothelin-1 and nitric oxide (NO) synthases, and inflammation.17-21 In contrast to hypoxia-induced PH, remodeling in COPD is mostly explained by hyperplasia of the intima22, 23 instead of the media. But, nevertheless, the other vessel wall layers, the media and the adventitia, are also involved.13, 24

Interestingly, although apparent in vessels of different sizes, small muscular arteries and arterioles are predominantly affected in COPD.22, 23 PH could not only be seen in patients with mild and severe COPD, but also in heavy smokers with normal lung function25 demonstrating occurrence of PH at different degrees of disease severity. In part speculatively, the thickening of the intima may be explained by several possible events:

2) attraction and differentiation of precursor or bone marrow-derived progenitor cells to SMCs,

The identification of differentiated and non-differentiated SMCs can be seen by the existence of vimentin and desmin.28, 29 Interestingly, some SMCs in the intima of smokers and patients with mild COPD express vimentin, but not desmin filaments.30 SMCs positive for vimentin, but not for desmin represent a subpopulation of less differentiated SMCs that may take part in an ongoing process of vascular remodeling.4 The origin of these SMCs is still not fully resolved and has to be deciphered in future. Potentially, bone marrow-derived progenitor vascular cells might be an explanation. However, such an involvement might have two effects, which could compete:

1) differentiation into endothelial cells contributing to vascular repair or

As mentioned above, the remodeling process observed after chronic hypoxia or cigarette smoke exposure seems to be different. For instance, PH induced by chronic hypoxia at high altitudes is primarily associated with medial  hypertrophy and is completely reversible a few weeks after return to sea level.7 Also a recent study in mice found a differential gene regulation comparing smoke-induced PH and hypoxia-induced PH, although a similar vascular phenotype was observed.13 In contrast to hypoxia-induced PH, PH associated with COPD can involve all vessel layers. Such differences may explain why PH in COPD can often not be reversed, even not by supplemental oxygen, neither acutely31 nor chronically.32 It is essential to differentiate between pulmonary vascular remodeling during the development of COPD, when airway obstruction and parenchyma destruction has not occurred yet, and established COPD, when patients suffer from hypoxia as a result of airway obstruction, a loss of alveoli and vessels. According to the pioneer work from J. A. Barberà´s group and subsequent studies, there is no doubt that vascular remodeling already occurs in smokers (in human beings and animals) who do not suffer from COPD/emphysema yet.4, 30 It could be nicely demonstrated that human smokers without changes in lung function showed remodeled vessels with predominant intima thickening whereas the media layer did not seem to be involved.30 Along these lines, the literature suggests alterations in the intima layer as the major pulmonary vascular pathohistological feature in COPD-PH, without significant change in media.4, 22, 25, 33 In contrast Wick et al. demonstrated that pulmonary vascular remodeling in COPD patients was associated with variable intimal and importantly, prominent medial/adventitial thickening.34 Furthermore, a systematic characterization of pulmonary vascular remodeling in COPD revealed a significant increase of media wall thickness of the small vessels in COPD patients compared with donors.35

Interestingly, uncontrolled proliferation of PASMCs represents indeed a major contributor to medial hypertrophy, and it was shown previously that cigarette smoke extract may stimulate the proliferation of these cells.36, 37 As depicted in the Figure 1, the pulmonary vessels of end-stage COPD patients can strongly be remodeled with a clear thickening of the media, additionally to severe intimal remodeling. This raises the question if this media involvement only occurs as a result of hypoxia/hypoxemia after destruction of gas exchange surface and airway obstruction or if this can also take place in an early stage during the development of COPD. Because of the lack of respective extensive studies, it still stays speculative. Interestingly, our group demonstrated recently, that the vascular alterations and the development of PH preceded the emphysema development in mice.13 This is in line with the observations seen in humans and guinea pigs, where vascular remodeling was present after smoke exposure with a lack of emphysema.12, 30 In addition, we could show that the origin of the PH and emphysema development was independent of hypoxia/hypoxemia.13 This suggests a mechanism for triggering vascular remodeling which does not need the hypoxic stimulus.

Summary and the question for interactive discussion

Based on the existing controversies regarding the involvement of the media layer in pulmonary vascular remodeling associated with COPD, we would like to postulate the question: Is pulmonary vascular remodeling in COPD just a matter of intima alteration? We invite all experts and persons/scientists interested in this field to reply and express their valuable views on this important scientific and clinical issue, in the next volume of PVRI Chronicle.

We thank Ewa Bieniek for technical assistance and Walter Klepetko from University of Vienna for providing human lung tissue samples. The protocol for lung tissue donation was approved by the Ethics Committee of the University Hospital Giessen, as mentioned previously.13

1. Sertogullarindan B, Gumrukcuoglu HA, Sezgi C, and Akil MA. Frequency of pulmonary hypertension in patients with COPD due to biomass smoke and tobacco smoke. International journal of medical sciences. 2012;9(6):406-12. 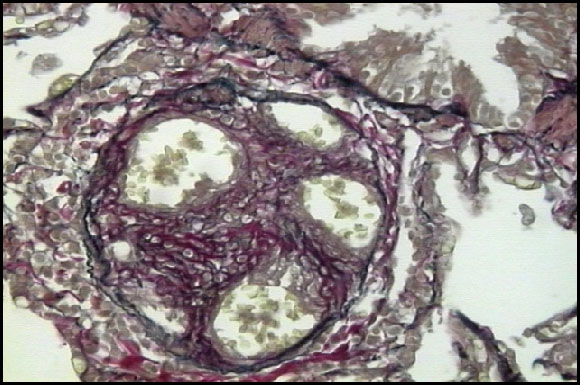